Did Lightning Cause Collapse of Bridge in Genoa?

The Morandi Bridge, a major vehicular artery, collapsed in Genoa, Italy on August 14, 2018, killing at least several dozen people. A video that captured the structural failure shows what might be lightning striking the bridge as the fall begins.

Back to Previous Blog Did Lightning Cause Collapse of Bridge in Genoa?

The Morandi Bridge, a major vehicular artery, collapsed in Genoa, Italy on August 14, 2018, killing at least several dozen people. A video that captured the structural failure shows what might be lightning striking the bridge as the fall begins.

In the immediate aftermath of a disaster, attention must focus on rescuing the injured, finding the dead, and stabilizing the wreckage to prevent further damage and injuries. After that, there will be time to gather forensic evidence and conduct engineering investigations to help understand what happened, why, and how to prevent similar incidents in the future.

Lightning strikes to large bridges are common because of their height and expansive footprint. A properly designed lightning protection system is essential to ensure that these strikes can pass through the structure without causing damage.

Bridges contain a great deal of structural metal that can be used to conduct lightning. Careful attention is required to ensure the metal forms adequately-sized paths to conduct the current on to and off of the structural metal and safely into the ground. This includes extensive bonding and grounding systems, along with interconnections to concrete reinforcing bars and other components within the bridge. Lightning protection systems also require regular inspections to ensure the continuity of the system has not been compromised.

The Genoa bridge had a concrete superstructure. All concrete contains residual water, even after curing; during severe storms, additional water can penetrate concrete through cracks and joints. The water is conductive and vaporizes explosively when lightning flows through the concrete causing damage.

There are many possible causes, besides lightning, that could have contributed to the collapse: The bridge has weathered over 50 years of heavy-duty service; it was known to need repairs and, in fact, repairs were in progress; and an unusually heavy rainstorm was in progress. One speculation is that these factors combined to make the bridge vulnerable and a chain reaction was triggered by the lightning.

A disaster becomes a tragedy if we fail to learn from it. We do not need to wait several years for the bridge investigation’s final report to learn from the Morandi Bridge failure. The disaster reminds us that lightning is a grave danger and that a lightning protection system should be considered for all buildings and structures. 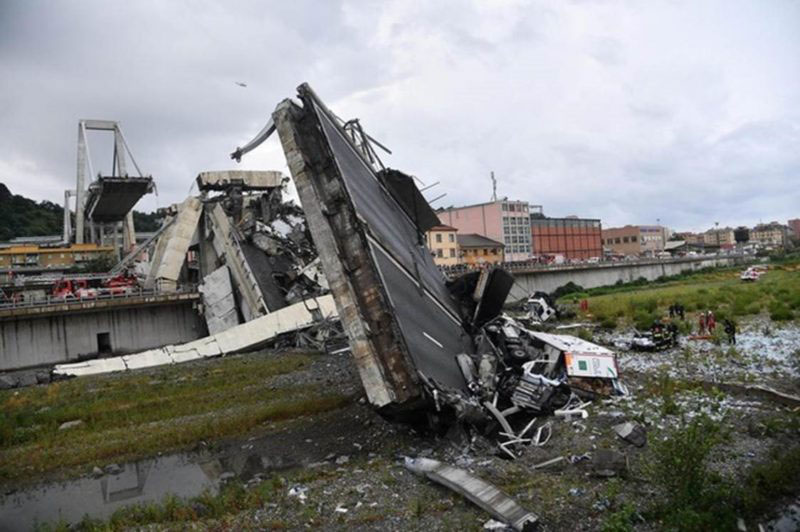